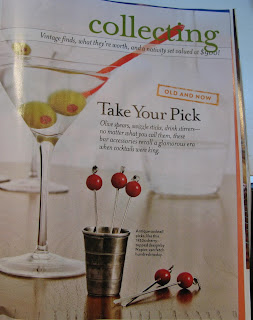 Collecting
Vintage finds, what they´re worth, and a nativity set valued at $ 900!

Take your Pick
Olive spears, swizzle sticks, drink stirrers- no matter what you call them, these bar accessories recall a glamorous era when cocktails were king. 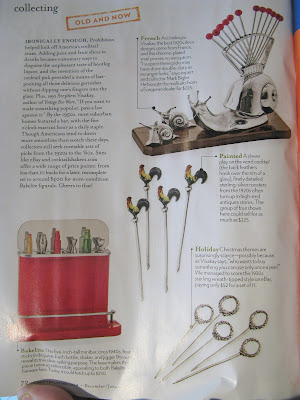 Ironically enough, Prohibition helped kick off America´s cocktail craze. Adding juice and fruit slices to drinks became customary ways to disguise the unpleasant taste of bootleg liquor, and the invention of the cocktail pick provided a means of harpooning all those delicious garnishes without dipping one´s fingers into the glass. Plus says Stephen Visakay, author of Vintage Bar Ware, “If you want to make something popular, pass a law against it.” By the 1950s, most suburban homes featured a bar, with the 5 o´clock martini hour as a daily staple. Though Americans tend to down more smoothies than scotch these days, collectors still seek covetable sets of picks from the 1920s to the ´60s. Sites like eBay and cocktailshakers.com offer a wide range of price points: from less than 10 bucks for a later, incomplete set to around $400 for mint condition Bakelite figurals. Cheers to that.

French According to Visakay, the best 1920´s deco designs come from France, and this chrome-plated snail proves no exeption.
“I suspect these picks may have done double-duty as escargot forks” says expert and collector Mark Bigler. He bought the molluscs from a European dealer for $225.

Painted A clever play on the word cocktail (the back feathers hook over the rim of a glass), finely detailed sterling silver roosters from the 1920s often turn up in high-end antiques stores . The group of four shown here could sell for as much as $225.

Holiday Christmas themes are surprisingly scare-possibly because, as Visakay says, “who wants to buy something you can use only once a year?” We managed to score this 1930s sterling wreath-tipped style on eBay, paying only $52 for a set of 11.

Bakelite This five-inch-tall minibar, circa 1940 featuring sticks in disguise: Each bottle, shaker and jigger lifts out … reveals its true olive spiking purpose, The base makes this… piece twice as collectible, appealing to both Bakelite… barware fans . Today it could fetch up to $250. 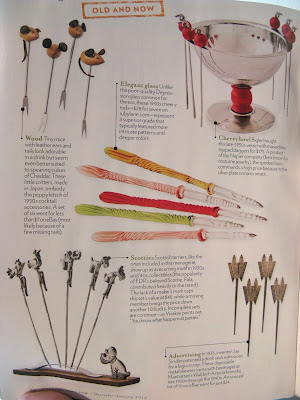 Wood Tiny mice with leather ears and tails look adorable in a drink but seem even better suited to spearing cubes of Cheddar. These little critters, made in Japan, embody the peppy kitsch of 1950s cocktail accessories. A set of six went for less than $7 on eBay (most likely because of a few missing tails).

Elegant glass Unlike the poor-quality Depression glass common for the era, these 1930s cherry rods-$28 for seven on rubylane.com- represent a superior grade that typically featured more intrigate patterns and deeper colors.

Cherry bowl Bigler bought this late-130s vessel with maraschino-topped daggers for $175. A product of the Napier company (best known for costume jewelry), the spotless pasin commands a high price because its thin silver plate remains intact.

Scotties Scottish terriers, like the ones included in this menagerie, show up as a recurring motiv in 1930s an ´40s collectibles (the popularity of FDR´s beloved Scottie, Fala, contributed heavily to the trend).
The lack of a makerß´s mark caps this set´s at $45, while missing member brings the price down another 10 bucks. Incomplete sets are common-as Visakay points out. !You know what happens at parties”

Advertising In 1935, inventor Jay Sindler patented a drink stick with room for a logo on top. These disposable metal skewers came with beverages at Manhattan´s Waldorf-Astoria from the late 1930s through the 1940s. An unused lot of 10 on eBay went for...
Eingestellt von Thorsten um Mittwoch, Dezember 02, 2009 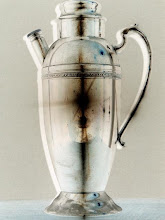